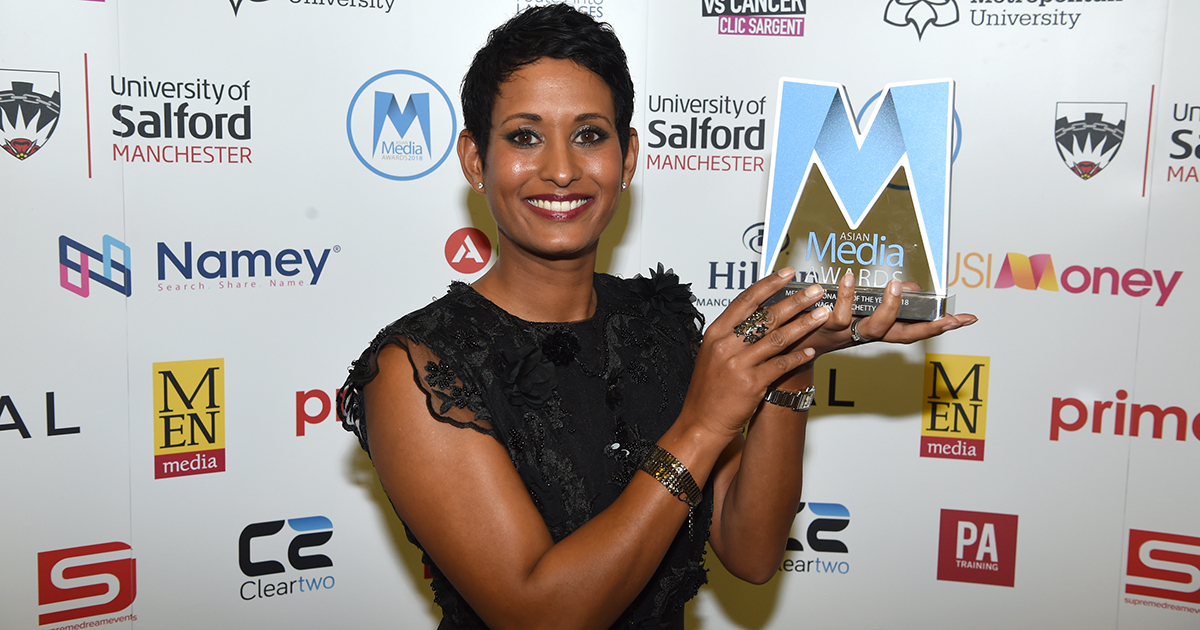 Naga Munchetty, Ayub Khan Din and Faisal Islam were among those honoured at the 2018 Asian Media Awards.

The University of Salford 6th Asian Media Awards ceremony took place at the Manchester Hilton Deansgate (Thursday October 25) in front of journalists, presenters and media personalities from across the UK.

East is East and Ackley Bridge creator Ayub Khan Din was presented with the Sophiya Haque Services to British Television and Film Award.

Ayub said, “I’m delighted and honoured to accept an achievement award for a body of work that I hope continues to inform and entertain and hopefully inspire other young British Asian Men and Women to do the same”.

He was presented the award by the sister of Sophiya Haque, Aysha Jamieson after an introduction detailing his influence of British films and television by broadcaster and journalist Sarfraz Manzoor.

BBC Breakfast presenter Naga Munchetty was awarded the Media Personality of the Year honour by young ambassadors from the cancer charity CLIC Sargent – official charity partners at the event.

As well as sharing her journey as a broadcaster, speaking on stage Naga said she was overwhelmed by the support she receives from members of the public. “I think it matters being different. I often get approached by families on the street with young children saying to their kids, ‘You could be her – you could do what she is doing. She managed it and that matters.'”

There was a special award to commemorate 25 years in broadcasting for Tommy Nagra, who helped to launch some of the most defining programmes on British television.

Sky News Political Editor Faisal Islam who has broken a string of exclusive stories in the past year was named the MMU Journalist of the Year.

‘Child Victims Rohingya’ part of a wider series of broadcasts by Ashish Joshi into the tragic plight of the Rohingya victims won the TV Report of the Year accolade.

He was presented his award by BBC Midlands reporter Satnam Rana. Satnam was diagnosed with breast cancer in 2017 and through the turbulent moments and hospital appointments she has aimed to raise awareness of the illness.

The highly coveted Best Investigation Award went to ‘White Right: Meeting the Enemy,’ a report by Deeyah Khan which explores the far-right in America.

Deeyah Khan said, “I am overjoyed that my ITV documentary White Right: Meeting the Enemy has been honoured at the Asian Media Awards this year, especially considering it was up against so many other very worthy competitors.

“This award reflects the importance of the film’s message: the growing  threat of racist ideologies – and the power of empathy to rebuild human connections. I am grateful and humbled to have had the support of the Asian Media Awards for several of my Fuuse projects over the years.”

“I believe that a platform like the Asian Media Awards is crucial as it continues to draw attention to the diversity of talent in the industry in order to  better reflect the societies we live in.”

The Sports Journalist of the Year category saw nominations read out by Alan Shearer from the Match of the Day studios in a pre-recorded segment. It was won by presenter and reporter Seema Jaswal. 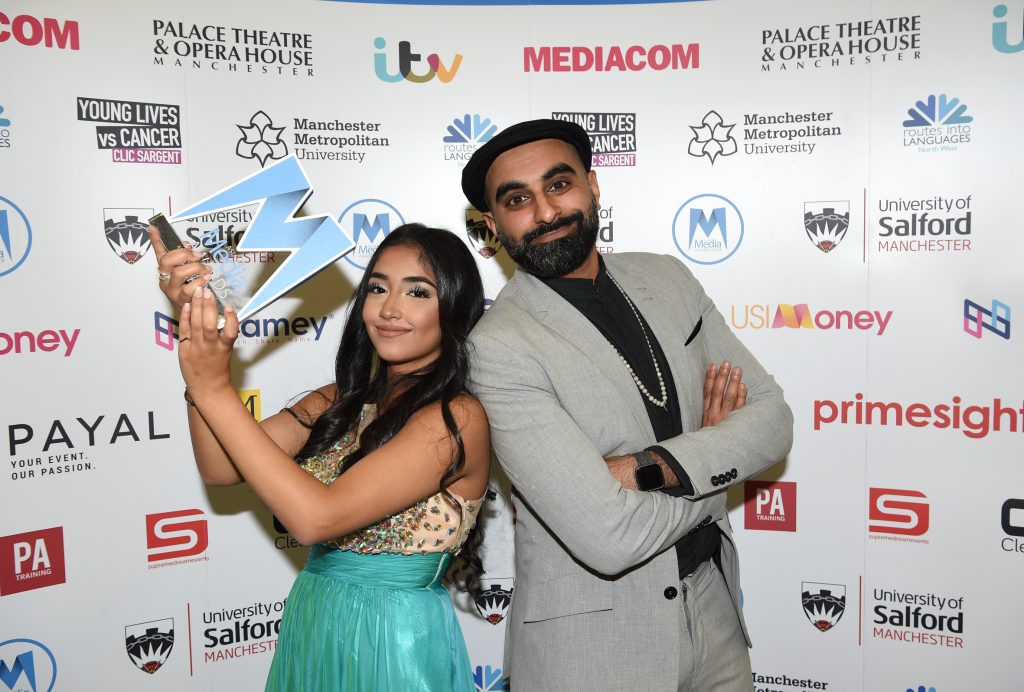 Dúaa Karim, who hit the TV screens with aplomb taking on the role of Aqsa, aka ‘Little Aks’ in the hit BBC Three comedy ‘Man Like Mobeen,’ was named the 2018 AMA Best Newcomer.

In the radio categories BBC Asian Network regained the Radio Station of the Year accolade. The station also celebrated a win with the Best Radio Show award for Late Night with Mobeen Azhar.

Anushka Arora of Sunrise Radio won the Radio Presenter of the Year category and Kavita Kukar of Panda Radio picked up the first Rising Star in Radio Award.

Asian Star 101.6FM won the Regional Radio Station of the Year category, an honour they last won in 2014.

In the creative and marketing categories Penny Appeal’s ‘As British As’ campaign won the Creative Media Award. Cultr London were named Media Agency of the Year and Vickram Sembhi of Exterion Media UK won the Media Professional of the Year award.

The TV categories saw Sony TV put an end to Star Plus’s grip on the TV Channel of the Year Award. The Boy With The Topknot won the Best TV Programme category and Sanjeev Bhaskar was named the Best TV Character for his role as DI Sunny Khan in the hit drama Unforgotten.

Vlogger Ibz Mo was named Best Blog whilst BizAsiaLive.com won their second Asian Media Award for Best Publication/Website. It was their second award in this category after their triumph in 2014.

Ahead of the 100th anniversary of the ending of the First World War there was a special commemoration for the sacrifices of those who died in the Great War. Lord Gadhia who is leading a campaign to honour the South Asians who died spoke on the night.

He said, “These were predominantly young men who had travelled thousands of miles by ship from their homeland to fight a distant war.

“They adjusted to a cold and harsh climate with completely different food, language and customs. The first Indian soldiers arrived on the Western Front within six weeks of the outbreak of war, poorly prepared for the freezing weather, grappling with unfamiliar equipment and lack of ammunition.

“Some didn’t even fully appreciate the cause they were fighting for, but they did their duty and their nation proud.”

Winners and recipients of AMA special awards were announced at the Hilton Manchester Deansgate on Thursday 25 October.